For some reason, after writing last night… All I have been thinking about all day is when I’m going to post again.  Please note, I have not been thinking of great ideas for content, just timing.  Oh well, I’m going to run with it anyways.

Of course, everyone loves his or her family.  Everyone thinks their family is the best, and just about everyone I have come into contact with thinks their family is crazy… That is, of course, until they meet mine!  All it takes is a few anecdotes about the table catching on fire during thanksgiving dinner, or any story that starts with “So, we were playing ‘Oh, Hell!’…” and the person with whom I’m discussing the subject starts politely nodding and mentally deciding that perhaps their own family isn’t so bad after all.

Susie was my maid of honor and gave a toast that rapidly laid out pretty much all the dirt she had gained on me in the previous 23 years.  At Susie’s wedding, there was not really a good moment to elaborate on all of our “exciting” times together, but now I have these anecdotes, so I suppose today is a good time to use ‘em!  Happy Birthday, Susie!

Although we all like to think she is good at heart, Susie has lived her life in such a way to make it clear to others that typical rules and societal norms don’t apply to her… I think one of the more widely approved stories to support this idea involves Grandma.

Although I was much too young to remember this story first hand (and possibly not even present) it lives on in infamy and has been retold to the extent that I feel comfortable sharing it here.  She was young (albeit, old enough to know better), and she and her sister were visiting Grandma’s house.  Our Grandma’s cookies are without a doubt, the best the world had to offer at the time.  Although willing to dole them out as we wished, Grandma kept these cookies on top of her fridge, lest our parents object to the raging monsters we became when we ate as much sugar as we desired.  The insurmountable height to the top of the fridge was enough to make retrieving the cookies a chore for our very short grandmother.  So, it was believed that infiltrating this defense mechanism was well beyond the capabilities of any of the grandchildren.  One day, Susie decided that she would do the impossible.  She would obtain the cookies.  However, a problem stood in her way.  Grandma had said no.  From time to time, this sort of thing would happen.  Pressured by our parents, she would have to deny us the little bundles of heaven we so desperately wanted. But, she was Grandma.  She was sacred.  She could say no and we would listen.  Most of us, anyways.  Not Susie… Not that day.  She defiantly scaled the counter, scaled the refrigerator, to find herself amidst a rooftop paradise.  A cornucopia of cookies so delicious and plentiful that were hers to eat.  Grandma of course, objected.  She objected vociferously. However, at her small stature somewhere below five feet… she was limited to verbal objections, to which Susie was clearly immune.

Another representative anecdote of her disregard for societal expectations could be the time she made a U-turn in the middle of a road. In a downtown metropolis.  That road was also on a bridge and under construction.  Despite the middle finger we got from a woman who easily could have been on her way to teach Sunday school to her elderly peers, we survived. (And, as an added bonus, we know that her seatbelts are quite functional!)

There are so many more stories that need to be shared; for example, the time Susie was babysitting shortly after my parents had finished repainting the ceilings (who does that, anyways?!) and we managed to get black cherry Jell-o literally stuck to the ceiling… We had to get a step ladder to pull it down.  Of course, then we had to repeat the entire process when my brother, who had missed the first incident, didn’t believe us that Jell-o would stick to the ceiling.  So, we did it again, and a few more times after that just to make sure that our hypothesis was valid.

There was also the time while she was babysitting us that one of my brother’s friends climbed a tree in the front yard.  He got pretty high, decided he was safe, and proceeded to mouth off to her.  His logic was: first, that babysitter won’t climb a tree to make me shut up, and second, she won’t risk injuring me because I’m a child.  He was right on the first count, but wrong on the second.  Susie went to the house, got the hose and the sprayer nozzle (good thing Dad is into gardening or else her weapon of choice may not have been nearly as effective) and simply hosed him out of the tree.  She sprayed him until he lost his grip and fell.  (He was fine but definitely less mouthy after the experience!)

When I was little, Susie was one of those people I always looked up to.  She made me laugh, even if it meant getting in trouble and always followed her own rules.  She speaks what is on her mind, almost to a fault.  She showed me that you can be yourself and count on people to love you anyways… if they don’t, it’s their loss.  I have seen her go through some really crappy situations, and she has always handled them with grace and dignity (besides the punk kid in the tree, obviously).

If you read this, Susie, I hope it is a good enough birthday card.  At the very least, it has to be better than the one my mother sent you last year and forgot to write in…  Way to keep the expectations low!  I hope your birthday was wonderful and that your husband spoiled you!  On behalf of everyone who is lucky enough to know you… please do not consume any Starbucks today.  You scare us. 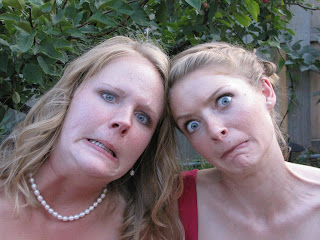