Thoughts on Labor and Delivery #3: Labor

It was now around 3 AM and I hadn’t eaten since 5PM and thus my stomach had more than one reason to hate me.  Once you are admitted to the hospital to have your baby you are placed on a “clear liquid diet” in case they need to go to an emergency surgery.  Apparently if you have surgery with even the slightest amount of non-clear liquid in your stomach you can “aspirate and die”… which was honestly a risk I was willing to take for some Chipotle, but since there are no Chipotles in Hawaii, it was time to cash in on those unlimited popsicles I had been promised.

Remember otter pops?  Those little bags of frozen sugar water that were the least exciting type of popsicles when you were a kid… I mean, they were still exciting because they were popsicles and all, so you couldn’t have them very often, or at least I didn’t, but honestly who would pick them over a fudgesicle?!  It turns out there are ways to make these popsicles the best thing in the world: first of all, don’t eat anything for several hours while undergoing a huge amount of stress to your body and then also make them the only option.  Those popsicles were heavenly. (Although the part where they cut into the side of your mouth if you eat them with any gusto is still a problem, but I wouldn’t realize that until I had eaten several more of them.)

Anyways the severe pain I had just endured did prompt my bloody show: a glob of mucus and blood that was the cork in the center of the cervix fell out.  …woo-hoo?

Whoever named it the bloody show clearly had a gift for rhetoric.

Rather than being a very on-the-head name for a disgusting process, I like to interpret it in a British way.  Like my uterus is a rather cantankerous British woman shouting “LET’S GET ON WITH THE BLOODY SHOW”.  A more angry version of Mrs. Doubtfire; a personality that would certainly mesh well with the pain she was causing me.

Cue slowly intensifying pain, contractions every 2-3 minutes – which, according to the sadist increasing my Pitocin was “the goal” and “right on target”.

10 AM. Hours have passed. Shifts have changed… rather luckily for the balloon tugging nurse, the subsequent cervical exam occurred after she left because upon realizing that it was in fact more sensitive than it was for everyone I had developed several suggestions regarding what she could use a foley bulb for.  Did I mention I was in pain?

By 10 AM I was anticipating progress. If I had been 3 cm at 7 AM, contracting with intense pain regularly since… I was probably at least 10 cm by now, or more realistically 6 cm. Time for some active labor.

Predictably, I was now a measly 4 cm.

I was ready to take matters into my own hands.  I had rested in the (less than comfortable) bed for long enough.  Time to jiggle this baby out.

Tripler provides birthing balls to laboring moms – which are essentially just normal medicine balls with fancy names because you use them while giving birth… and hopefully because they are cleaned more thoroughly.

A sheet and hospital gown were draped ceremonially over my new throne and I began to bounce as forcefully as I could muster.

In addition to making my legs tired, it was a nice distraction from the cyclic and increasing pain in my abdomen and back.  I bounced and I grabbed my handheld stress ball – affectionately dubbed Ninja Popa. As with most things in my life, there is a long and borderline entertaining backstory to his name, but if I told every tangential one of those we would be here until my daughter was 3, and as it turns out, babies don’t really tolerate such long absences.

So I said more on the hospital bag later.  I am a first time mom with absolutely zero claims to expertise in this arena, before packing my hospital bag (which was not finalized until approximately 39 weeks and change- and not the 32nd week as some excessively prepared iPhone app suggested) but I did do ample research and found several helpful suggestions and decided a few things were worth sharing.
Please note, any pregnant woman reading this, this is 1. Not a comprehensive list (in fact I’m only saying a few things) and 2. Not me trying to be hypocritical about "look what I did", it’s just the few things that I was glad to have and would recommend taking, in addition to the typical insurance info, clothes, that most grown adults know to pack when going some place for a medical procedure)

1.     Tennis balls helped me greatly.   Useful for back labor as a massager, and for my neck later.  Definitely take 2 of them and place them on both sides of your spine for low back pain – we even requested an extra hospital sock and used that to prevent them from rolling out to the sides while under my neck!

2.     Adorable stress ball… so obviously not everyone has a Ninja Popa.  He was important to me for more than his stress ball capabilities.  He was won for me by my partner in crime at an arcade for children, several months prior, where we were the oldest patrons by at least 10 years (and by far the most enthusiastic). He doubled as a nice way to take out my pain and a fun little memory to make me smile and remember how much I love the person who had sealed my fate for the extreme pain I suffered.  (The apps and books recommend a ‘focal point’? A picture of baby or a teddy bear for baby to keep you …focused? Honestly, if you don’t take one, you won’t forget why you are there, trust me.  Also, if you become a little ambivalent about baby during the whole –pushing- segment of this episode, looking at her tiny alien face from her first trimester ultrasound may not inspire the maternal strength you are seeking.)

3.     A movie.  Labor progresses slowly – we brought a redbox that we had rented earlier that day.  Our choice of Unforgettable featuring Katherine Heigl as a mother who watches her ex bring a new stepmom into her daughter’s life and slowly goes insane and tries to kill everyone while emotionally abusing her daughter is not one I would recommend. I know, I know, spoilers. But see, now you don’t need to watch it while in labor! You’re welcome.

Ninja Popa and I soldiered on atop our red rubber ball.  The contractions became painful enough that I was unable to ignore or speak during them.  I would put my head down and squeeze the life out of NP and remember that this. was. the. whole. point.

During this, for some reason, we had an Olympic trial of some sort on television.  It feels early for an Olympic trial though so maybe it was some sort of invitational.  Regardless of the terminology applied to the event, there were Olympic caliber athletes from countries around the world competing in the 800 meter run on television.  Distance running on TV is probably not a big draw for most people, but having formerly competed in 800 meter runs myself, (maybe a little more slowly and definitely with more of a pained expression) it interested me.  While bouncing on a ball approximately the same shape as me and feeling the burn from the minuscule exertion I could watch really skinny women, talented in one of my favorite sports, excel physically and achieve their dreams.  I was torn between rooting for one to trip and wanting them all to win – run free, you statistical anomalies! Bound like gazelles around that track for all of us round ones watching you on TV and secretly dying for something deep fried or a milkshake.

Once the men came on, I lost interest - Except for the one stand out dude who had arm muscles.  Not for that reason… I’ve just never seen an Olympic quality distance runner who also looks like he lifts weights with his top half.  Of course he didn’t win, but when he’s on the chopping block for body shaming I’m totally on his side… Except that I have no memory of his name or nationality, because I had to put my head down and breathe deeply every 2-3 minutes, which really adds up.

To check in with our handy pain scale, at this point I was feeling about an 8 during contractions – when having one, I was incapacitated.  In between, I was still wondering if I could somehow smuggle taco bell in without getting noticed and reminiscing about my high school cross country days and Beaumont shorts.  Now this is the law of the jungle... 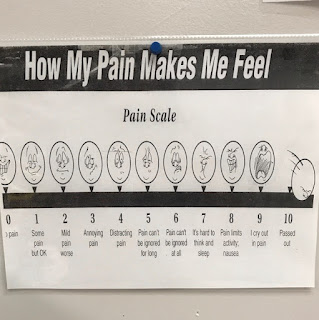