I was pumped with Tylenol (to bring down the fever), Zofran (to stop the feeling that I was going to throw up), Unasyn (antibiotics for the chorioamnionitis) and given an emesis basin (just in case).  PIC was instructed to offer me sips of water and he requested a cool rag for my forehead.  Time to suck it up and push.

I was really scared for this part, but it was actually not painful.  I could be a salesman for epidurals at this point.  My contractions felt like dull rectal and pelvic pressure – like needing to have a bowel movement, but a stronger sensation and involving more real estate.

As each contraction would escalate, I was instructed to push in bouts of 10 seconds at a time. “Push, 2, 3, 4, …” you get the picture.  Each push involved holding my breath and bearing down as though trying to poop.  I got a 2 second break in between which was barely enough time to inhale another large breath before the command “Push, 2, 3…” was repeated.  Unfortunately, the nurse in charge of counting was a slow counter.  I was oxygen deprived by 8, fading by 9 and gasping for air before she had finished saying 10.  For some reason, I did not advocate for myself, figuring this was just the way it was.  I needed to push for 10 seconds.  Luckily, the OB noticed and said we should only push for 7.  “Thank goodness” I responded, “I was about to pass out by the time we got to 10”.

After the first 2 contractions, I began to feel better.  Likely, the medicines kicking in, but it felt good to be doing something to help speed the process.  The doctor complimented my pushing skills, a sentiment echoed by everyone else in the room, she promised I was doing very well and moving the baby further down with each push.

“Not to brag or anything, but I’m not surprised… I’ve been pooping my whole life, so I have had lots of practice.”

I broke out laughing in the middle of one push, thinking of the scene from The Office where Jim and Pam are having their baby.  In the world of the fake documentary, the cameras aren’t allowed in the delivery room so it is audio only while Pam is pushing, but you hear Jim telling her enthusiastically to push only to be corrected by a nurse that she shouldn’t push now, so Jim yells “No. Don’t push  Don’t push, PULL!”

It’s rare that patients laugh during pushes (although apparently it isn’t counter productive!) and the OB curiously asked why.  After explaining and planting that seed in her brain, of course she accidentally instructed me to pull during the next contraction.  (I didn’t though).

And so it continued with all of us joking and talking, interrupted every 3 minutes by a wave of seriousness through the room while I focused on pushing.

Me, to PIC: “Yeah, I’m feeling rather ambivalent about this whole baby thing right now, I don’t want to do it any more.”  Doctor to me “Yeah, that’s totally an option, we will just leave and you just suck her back up in there.”

(At this point, we are down to the final minutes of baby inside me, so pediatrics has been paged and the room has approximately 15 healthcare professionals in it) Me, to PIC “I think this is the most naked I have been with this many people in the room since my own birth!”  Doctor, to PIC “I bet that’s a pretty reassuring thing to hear from the mother of your child.”

I honestly don’t remember all of the banter that preceded delivery.   Trust me, if you talk as much as I do, you learn to tune yourself out.  I do remember that as pushing proceeded, the rectal and pelvic pressure which had previously lightened between pushes began to grow more and more intense, without any breaks.  I was joking less between pushes and closing my eyes when I did push.  Finally, after a push, the pressure was slightly less and even less with the next push.  I laid there, eyes closed, awaiting further instructions.  PIC was the one to give them, “Look at her, honey.  She’s beautiful”

I opened my eyes and was surprised to see that she had already been placed on my chest.  “Oh, a baby!”  Were the first words I ever spoke to her.  (Thank goodness my toenails were painted and legs shaved or else this “insightful” exclamation would have been her only first impression of me). 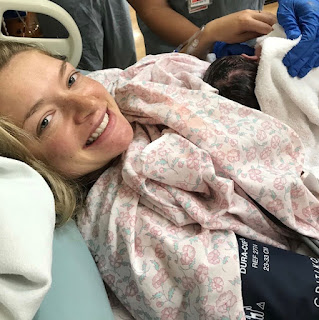 6:16 PM, August 10th 2018. Aloiya Karmen Brickner entered the world, vocally announcing her presence before she was even completely out.  She was still kicking me in the ribs while serenading me… which induced a mild panic attack that maybe another one was hiding in there and I was about to get a BOGO deal that I was entirely unprepared for. Thankfully, she was just a tall girl: 21 inches. 7lbs 12 ounces. Of note, she also crushed her APGARs.

I had pushed for less than 15 minutes.  I considered it a personal victory.

More importantly, the kitchen was open until 7, it was only 6:16.  I could order dinner!  I waited to declare this for a few moments of cuddling and admiring so that the staff would see that I was a good mom in addition to a good pusher.

When I told PIC to give me the menu at around 6:40, we were informed that the kitchen stops taking room service orders at 5.  Cue exhaustion and hormone induced rage. However, in the midst of labor, they had delivered a tray to my room!! When you don’t order, they assume you still want to eat. Cue transition to overwhelming love and gratitude.  It turns out, that when you don’t order, they send you what you ordered for the last meal… so I had a tray full of vegetable broth, jello, a (now-melted) popsicle, black coffee and juice just waiting for me to dig in!   Cue transition to despair and self-pity… Also, now is probably a good time for anyone who potentially could have made the cut to be a stand-in for PIC and thus in the room with me to thank him for his service on the front lines, as I am no fun when I am slightly inconvenienced and hungry, let alone exhausted and starving.

For what its worth, those of you out there reading, nodding emphatically and silently exclaiming “dodged a bullet there!”, I am well aware of this character flaw.  Like you, I don’t enjoy it.  I’m aware that I can be unpleasant when the Mr. Hyde side of my personality is unveiled by low blood sugar.  Unfortunately, although partially responsible, I am also unable to stop it.  Like you, I just have to strap in for the roller coaster ride and hope that it’s just a lot of scary ups and downs before coasting into the station instead of a launch into orbit ending in fiery disaster.

Luckily, we had packed snacks in our hospital bag, so PIC fed me crackers while I held Aloiya.  My first maternal attempt at multitasking.  I was already mother of the year in my head.  We marveled over the tiny human we had made while I dropped crumbs on her head.